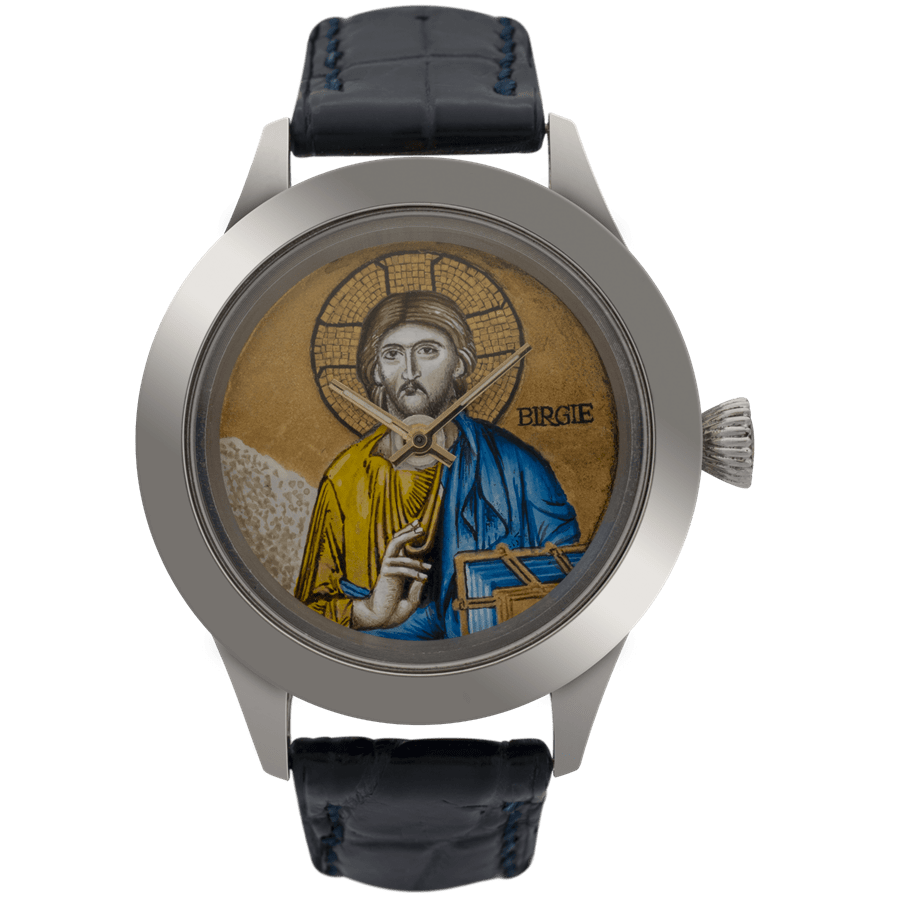 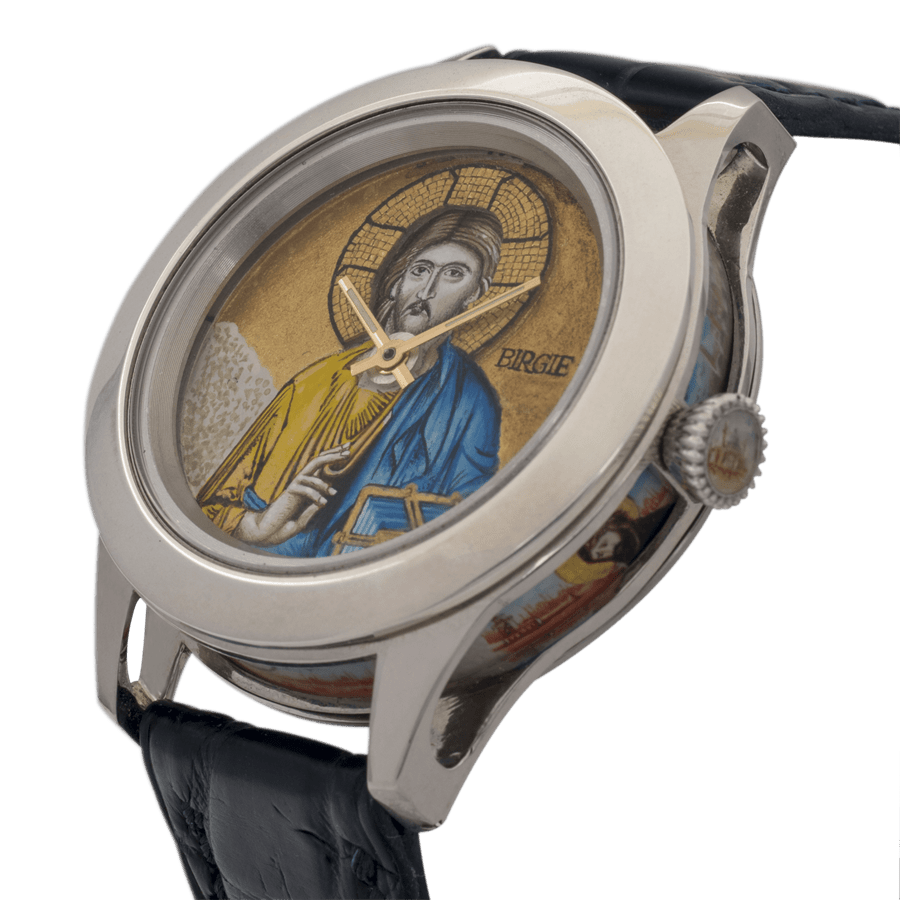 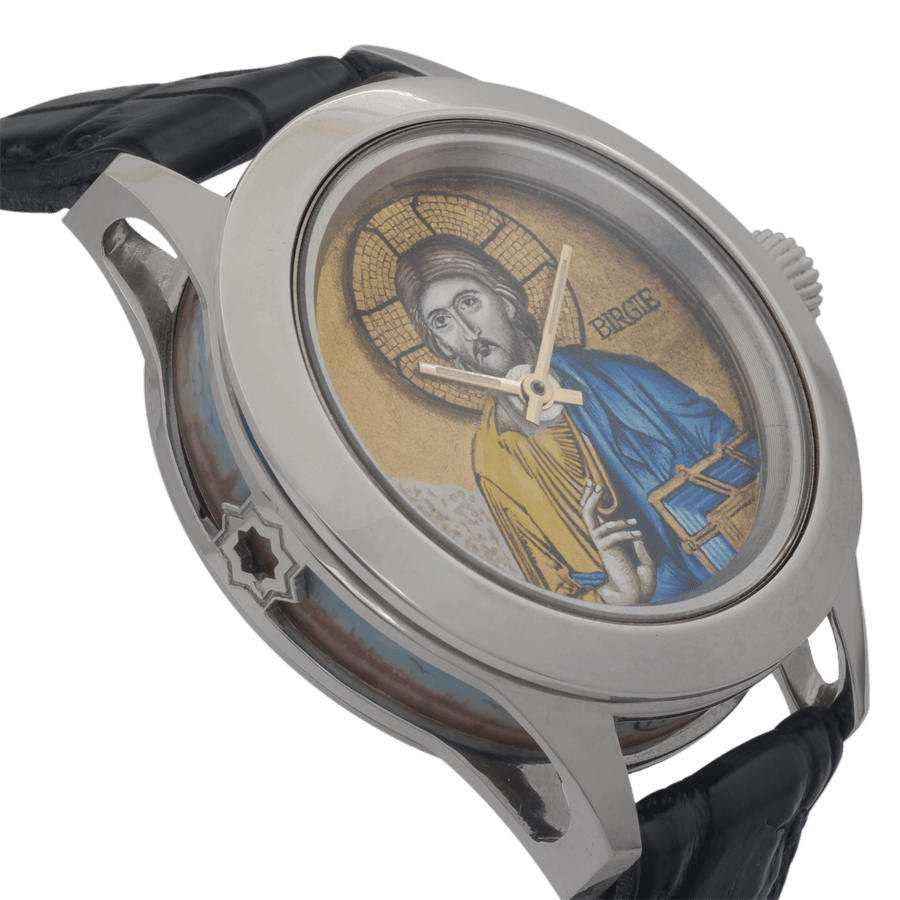 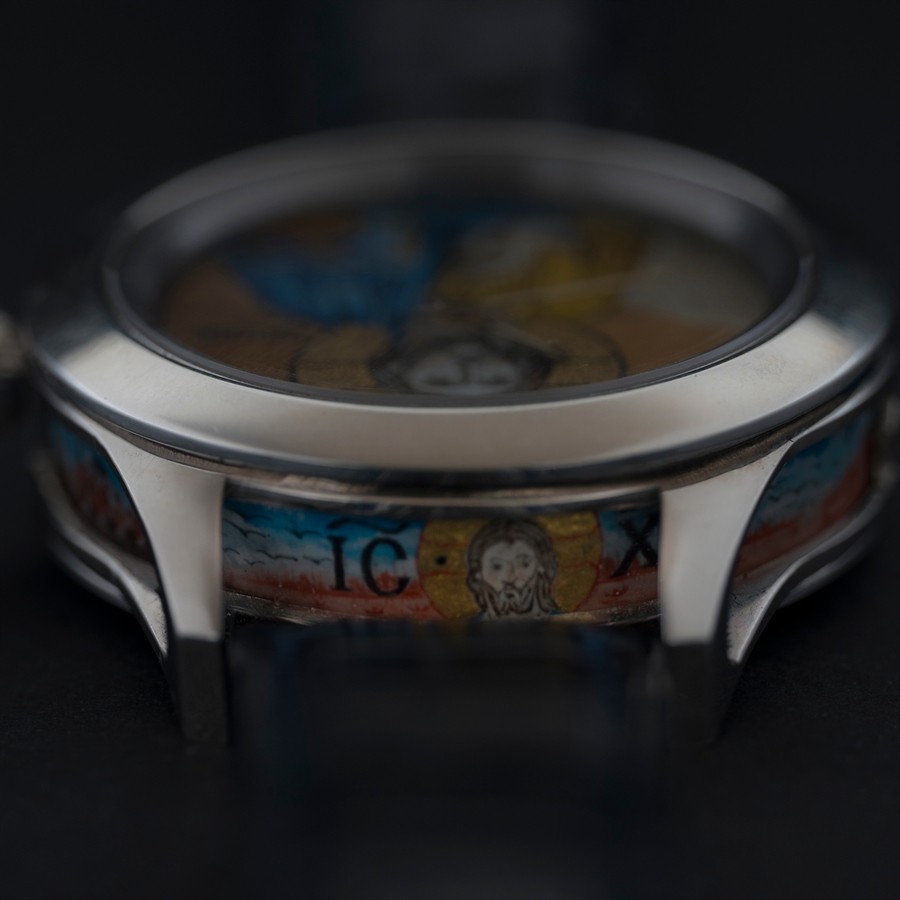 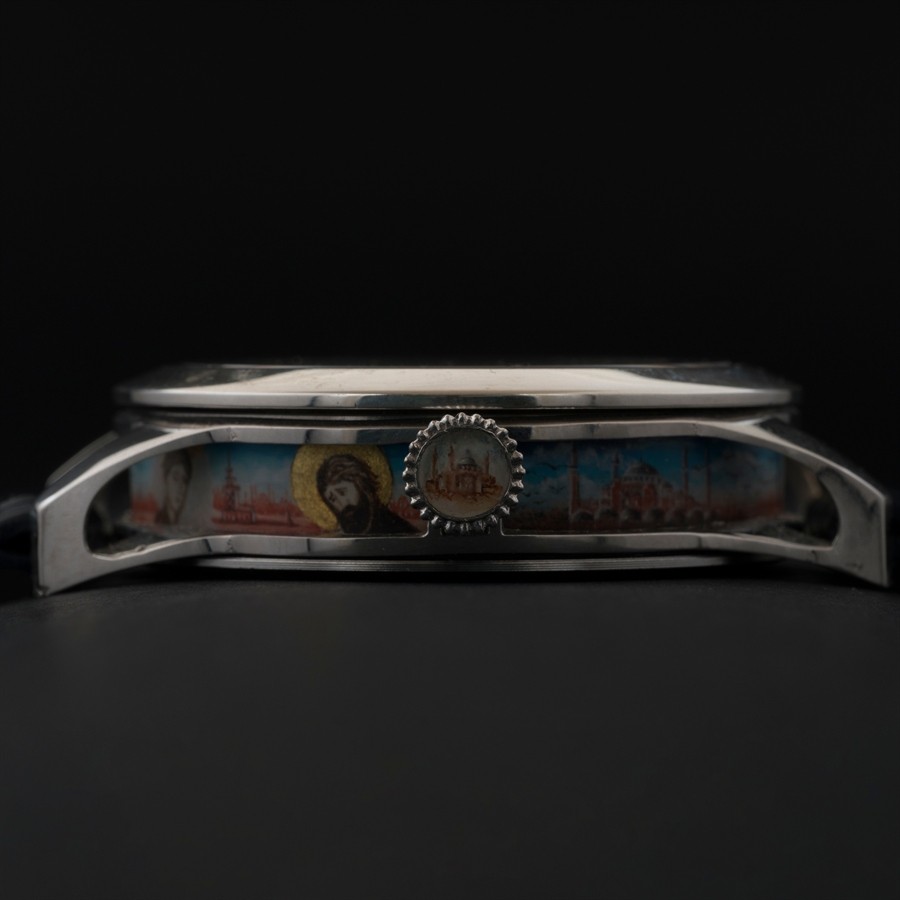 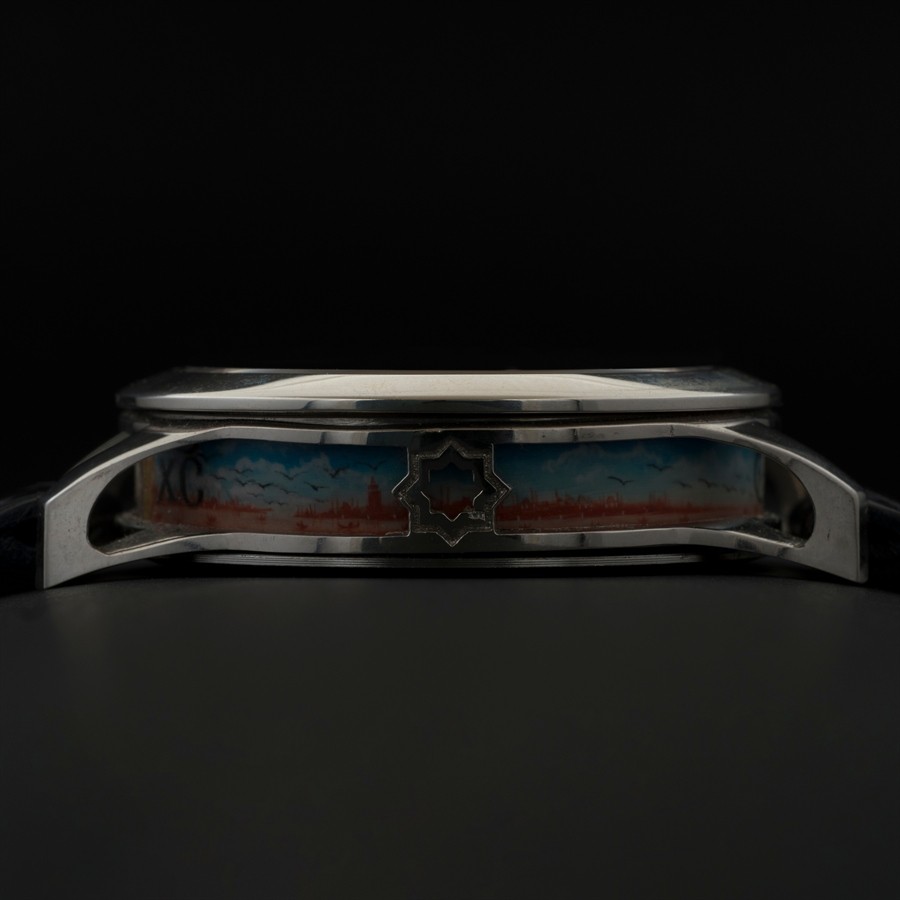 An enamored combination of micro mosaics and micro painting, this work of art introduces the image of Christ Pantocrator in the form of a timepiece. Reproduced from the original that is present in Hagia Sophia, the Deesis Mosaic, is now condensed into the case of your timepiece without any loss of detail.

CONTACT US
Deesis of Christ Pantrocrator, a Classical Micro Mosaic 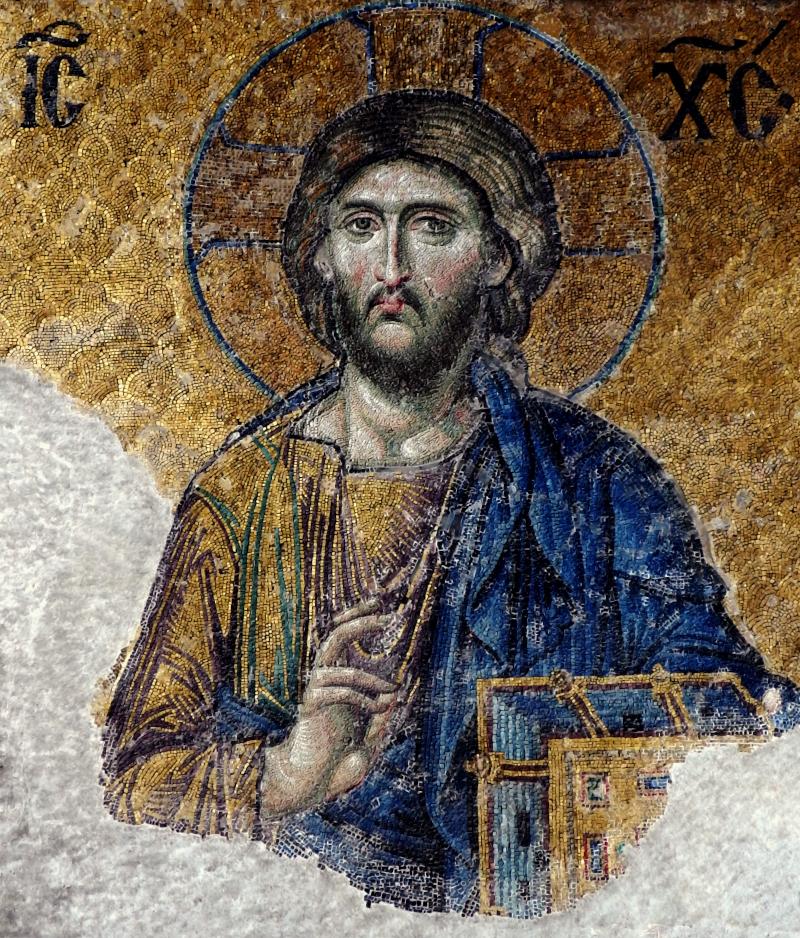 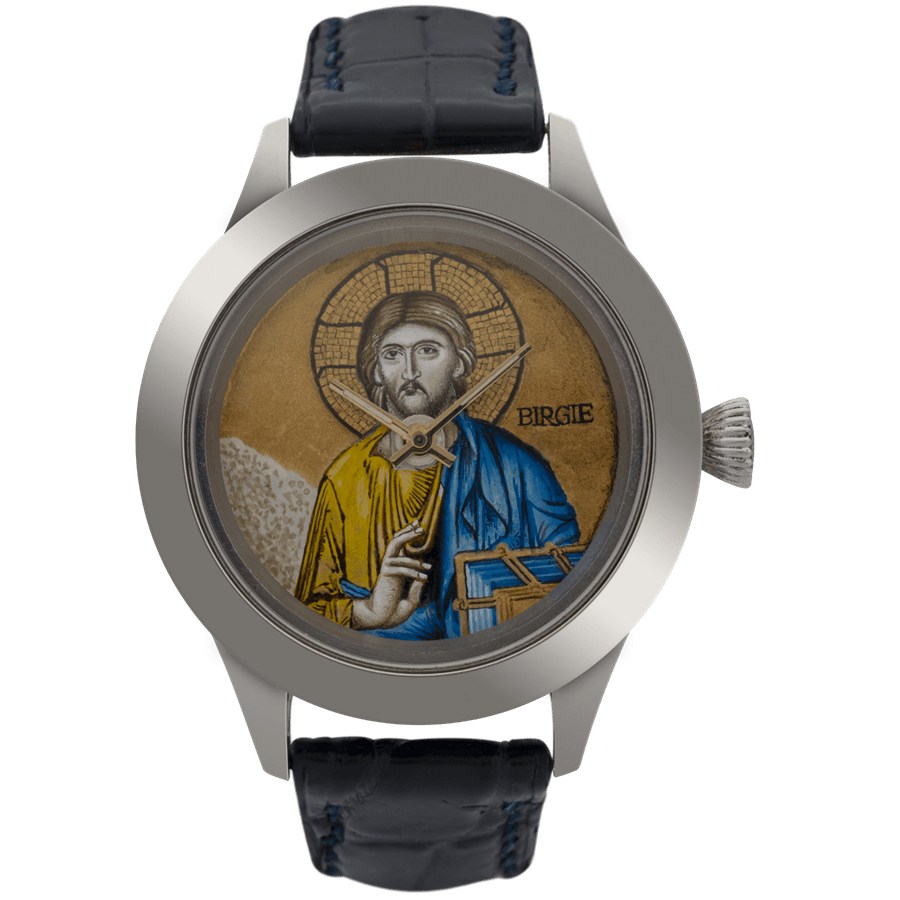 he original mosaic in Hagia Sophia is made in the 13th century. In this Period of high eastern art peaking, this mosaic was a masterpiece of its time. It’s made in a humanistic style with an innovative naturalistic attitude, also known to be one of the pioneers of early Renaissance. The figures have realistic depictions of emotion on their faces, begging for salvation for mankind. In that sense the stern, half judgemental attitude on the expression of Jesus is not of a static style.


Deesis composition is one of the early Christian iconographies, depicting Jesus enthroned with Mary and John present. They are painted as appealing to Jesus in the name of humanity at the day of Judgement. The small tiles, tesserae, used in the original are very small and have a large range of colors and hues, which add to the realistic impression of the masterwork. Glass tiles have been used at key points to enhance the light coming from the window from the left, giving the composition a certain flow of rhythm. The slight turning of the head provides the depth for the same dynamic purpose. The golden mosaic surrounding Jesus is inlaid with a trilogical pattern, captivating the natural light coming from the window, as well as slight floral patterns.


The trilogy is about Virgin Mary and St. John the Baptist; as well as being present in the right hand raised in benediction. The composition of Eastern Orthodox Final Judgement, Jesus is calm, yet stern, in his gaze towards the spectator; while both the Virgin and John are faced towards Jesus, in silent supplication with their heads bowed. His right hand raised in a pose that represents the letters IC and XC, an abbreviation for the name of Jesus in the Greek language. It includes the first and last names of IHCOYC and XPICTOC (Jesus and Christ), as well as the three fingers representing I and X, as in trinity. The touching of the thumb and the ring finger represents the Incarnation, which brings forth the dual nature of Jesus, both human and divine. In his left hand holding the Book of Gospels, which is on his divine side.


The bottom of the original mosaic has been damaged due to an opening of a window right next to it. In 1609, Sultan Ahmet the 1st, had the Pantocrator mosaic plastered, which is the prime reason how it managed to survive until our modern day in this condition. Sultan Ahmet the 3rd, in the 18th century, had given the order for the first repairments for Hagia Sophia, during which the former plaster started to crack and fall, revealing parts of the mosaic. In the century that followed, the Fossati brothers began the restoration of Hagia Sophia by the order of the Sultan, during which the cracked plaster was renewed.


During these repairs, the Fossati brothers also built a muvakkithane, a horologion structure for the purposes of keeping and measuring time which housed mechanical clocks. This horologion structure was made for the institution that studied astronomy and kept accurate record of time. The astronomers that worked in this institution had deep knowledge of the heavens; the movement of the sun, the moon and the stars, which they employed for the study of astronomy and set definite times for religious purposes. The inside of the horologion building was full of clocks, timekeepers, chronometers, horlogerie devices, timekeeping plates and schedules, calendars, schemas for astronomy. The astronomers of this institution were of high merit, and written many exquisite works about timekeeping. It’s also known that an automaton had existed in the southwestern corner of Hagia Sophia, built during the Byzantinian times, which was used to exclaim the time. The automaton was still present in the time of Sultan Ahmet the 3rd, as can be seen in the miniature painting of Ismail ez-Cezeri, in the book Kitabü’l-Hiyel. Having such a deep history of timekeeping, Hagia Sophia has been an important institution in timekeeping history.


After the declaration of the Republic, the mosque was turned into a museum, which triggered a series of restorations for Hagia Sohpia. During these restorations, in 1934, the deesis mosaic of Christ Pontocrator had been resurfaced from the plasters. The reproduction reintroduces this into the composition on the dial, in respect to the spirit of the mosaic composition in its current form.


The mosaic itself, even though it was made in the 13th century, is of an iconographic composition that has been depicted by many artists throughout history. In this instance, it seems to have mimicked the 6th century Christ Pantocrator mosaic of Sinani, present in St. Catherine’s Monastery. Being the earliest version of this style of depiction, the Hagia Sophia version seems to have perfectly reinterpreted the original Sinai version. It’s believed to be an imperial gift from the Byzantinian emperor Justinian the 1st, after his many donations to the Monastery. This brings the possibility that the original one, the Sinani version of 6th century, might have also been produced in the Byzantian capital of Constantinople.

It’s said to be incorporating the dual side of Jesus, the human and the celestial. One side of the face is not the same as the other one. One pleading, the other stern. This duality, as well as any other details, is finely painted and inlaid into the dial of the masterpiece. The great work that can only be viewed in Hagia Sophia, can now find its place right on your very wrist. 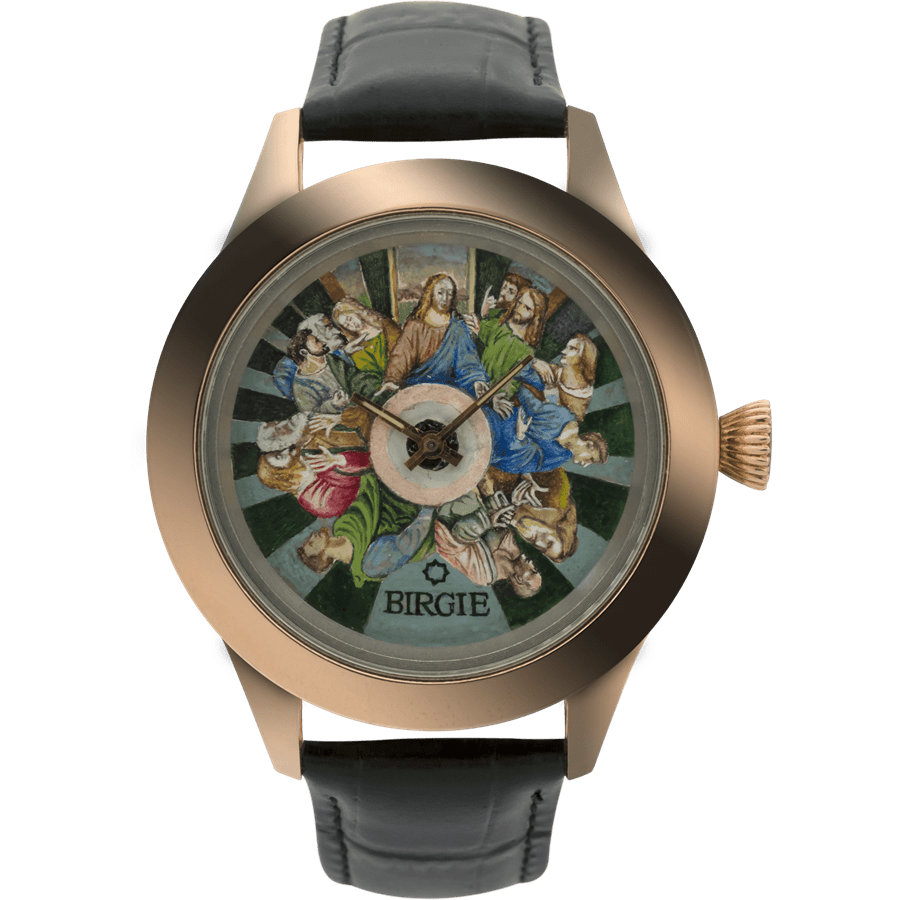 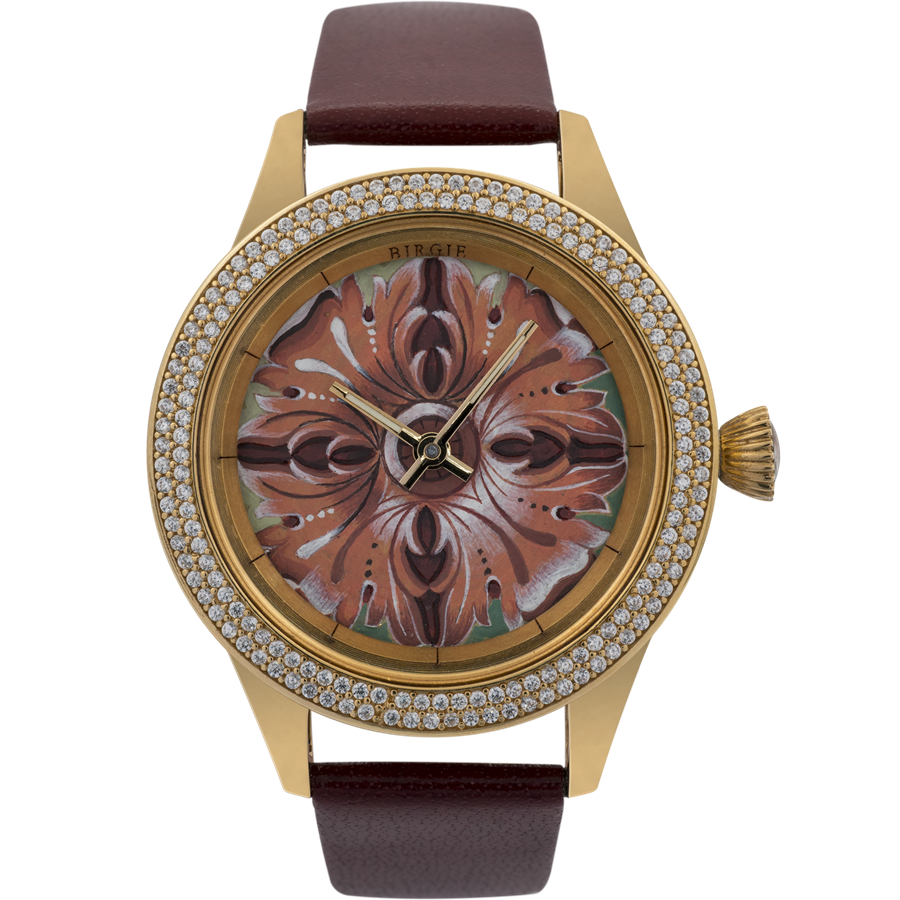 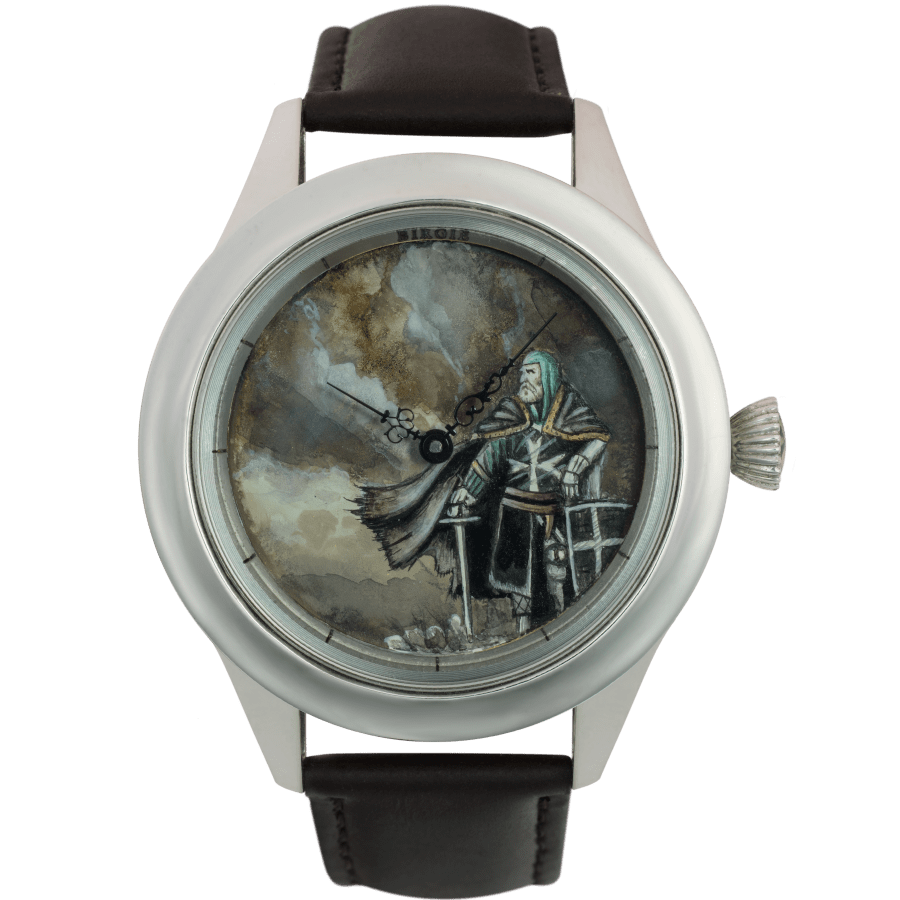